On Friday, September 7, the library world lost one of its stars, and I lost a friend with the passing of Ruth Toor.  Although Ruth withdrew four years ago from being an active presence in that world when Alzheimer’s made her unable to continue, her contributions were extensive and deserve to be celebrated, and I am honored to be in a position to do that.

Ruth became a librarian after her children started school.  For her entire career, she was the school librarian at Southern Boulevard School in Chatham, New Jersey.  She is still remembered there, but because of her commitment to libraries and librarians, her influence went much further.  Ruth was president of EMAnj (now NJASL) and in 1992-1993 was president of AASL.  She also was the recipient of the EMAnj President’s Award given to someone who “has demonstrated excellence and has advanced the profession of school library media specialist.”

During Ruth’s tenure as AASL President, the DeWitt Wallace-Reader’s Digest Fund in conjunction with AASL created Library Power which invested $40 million in nineteen communities across the country to transform school libraries.  Schools receiving the funds had to have a school librarian.  Barbara Stripling wrote about the program after it had been in progress for several years.  It showed what we can do when the funds are there.

University leading to a Supervisory Certificate for librarians.  Purely by chance, we both chose the same topic, a Volunteers’ Manual, for our culminating project. Our classmates, all of whom were leaders or future leaders in the state found the manual to be such a good idea, they urged us to get it published.

Through one of my volunteer mothers, I was connected to an editor at a subsidiary of Prentice Hall.  He wanted us to go beyond just a volunteer manual. Seeing the possibilities he did, we expanded the book and The Elementary School Librarian’s Almanac was published in 1979.  No one had seen anything like it before.  Up until then, there were books on Children’s and Young Adult Literature and tools such as The Fiction Catalog.  No one had ever written about how to do a better job as a librarian.  It was assumed we learned it all in library school.  We were pleased to learn the book even reached high school librarians.

Because of the book’s strong sales, we were asked to do a 10-month newsletter for school librarians and the School Librarian’s Workshop was born. Ruth and I worked together almost once-a-week starting to get out the first issue in September 1980.  At the time, Ruth would do the final typing before sending it to the printer.  I remember how life improved when she, and then I, got our first computers.

Over the years we wrote many more books.  (You can still find many of them for resale on Amazon). The 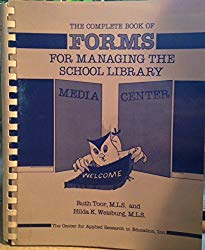 most recent ones we wrote for ALA Editions, and they are still available.  We started presenting first at our state’s conference and then at other ones across the country.  I remember when Ruth went to Alaska to give a week-long course to the librarians there.

These facts about Ruth are familiar to those who have been in librarianship for many years, but not many know about her past.  Ruth was born in Austria as Hitler was rising to power.  Her father wisely decided they needed to flee the country. Arriving with virtually no money, he took a job that paid far less than what he had been making (I believe he had been a lawyer.) and the family started over in the United States. By the time Ruth was fourteen, she had a job of her own working as a typist.  She was excellent at it, as she was with everything she did. And in the days before word processing programs, I was truly envious of her speed on the keyboard.  If I remember correctly, she eventually worked for the governor of Delaware.

Ruth and her husband have always been strong believers in “giving back.”  They funded a literary award

at her alma mater, the University of Delaware and have also have been contributors to AASL.  She never self-promoted, and she and Jay live simply.  Ruth has been a role model for integrity and a life of service to one’s communities. Her husband, Jay Toor, has funded the Ruth Toor Grant for Strong Public Libraries in her honor so that her legacy and commitment can continues

In many ways, I lost my friend years ago when because of the disease, she could no longer remember me, but now it is time for a final good-bye.  Farewell, Ruth.  My life has been richer for knowing you.