I recently realized these two topics are related when I discovered how many librarians are reluctant to weed, and the many issues that arise when they do. Perhaps you’ll feel better about the process when you realize weeding gives you several ways to promote your program. As you make your collection more relevant and less burdened by past choices, you show your program’s (and your) relevance.

The Issue of Weeding

I first encountered weeding back in the 1980s when I took over a high school library from a librarian who feared administrative reaction if she threw books out.  After all they were bought with hard-earned taxpayer money.  I had no such qualms.

Among the treasures I found on my shelves was a book called Percy Goes to Yale, the

complete Sue Barton series starting with Sue Barton Student Nurse which I had read twenty plus years before in high school.  Other treasures included a 300+ page book on homeroom guidance, a science book with a chapter on the Piltdown Man, first “discovered” in 1912 and proved a hoax in 1949, and a guide for young ladies called What’s Your PQ? about how girls should keep their intellect and skills hidden so as not to seem superior to their dates.

Weeding needs to be a continuous process to keep collections current. Having books on the shelf just for the sake of having them is a disservice to students. Worrying about keeping a certain number so you have 20 books per student or whatever formula you are following means nothing if the books aren’t helpful.

While librarians are still be eliminated, in other places the positions have been restored.  The newly hired librarians are faced with books that haven’t circulated in years and nothing current.  This is one place leadership shows up.  If you put books you have weeded onto a cart and either show the howlers to your principal or take a picture of them and share it, you will show how you mean to take charge of your library.  Tie it into your view of what a 21st century program should be and use it to show your leadership.

You can also use weeding as a means of building advocates for the library program by inviting volunteers to assist you.  If you don’t have library volunteers, with the principal’s approval, see if the PTA will work with you to sponsor a Weeding Saturday.  Have carts and criteria ready along with snacks and drinks.

Choosing What to Weed

For criteria, many librarians use the CREW and MUSTIE method created by Belinda Boon and presented in full in The CREW Method; Expanded Guidelines for Collection Evaluation and Weeding for Small and Medium-Sized Public Libraries (Austin, Texas: The Texas State Library, 1995). In it she explains the two acronyms. CREW stands for Continuous Review, Evaluation, and Weeding while MUSTIE helps you decide what to throw out:

My personal favorite resource on weeding is Less is More: A Practical Guide to Weeding School Library Collections by Donna J. Baumbach and Linda L. Miller (Chicago: ALA, 2006). While now 10 years old, it is still incredibly helpful.

Library Girl offers the acronym FRESH.  The image at the left explains her measures and if you click on image (or her name at the beginning of this sentence), you’ll read her article on the subject.

When your volunteers arrive, explain the criteria to them and let them begin.  Be sure they know you will review each item because once in a while, they pull a classic that really should be kept.  Keep track of the total number of books to discard and photograph everyone hard at work as well as the results of their labor – the piles of books and the uncluttered shelves.

Part two of the weeding process brings up what can be a thorny issue.  What do you do with the discards? Before you begin, find out what the district’s policy is.  Assuming you have the right to dispose of them as you wish, think twice before you send them to Africa, to a school lacking in books, or to classroom collections.  I know it’s hard for most of us to throw books out.  And tossing what were expensive reference sets seems wrong but why would you burden another collection with books that aren’t valuable.

Before you choose one of those options, I urge you to read an article by Gail Dickinson in the April/May 2005 issue of Library Media Connection. In addition to explaining the weeding process succinctly, going through all relevant steps –and discussing MUSTY (which I like even better than MUSTIE) she makes an analogy between milk in your refrigerator that is past the sale date and has curdled and books that are outdated and contain misinformation.

One more story from my past.  I was working with a group of volunteers on a community service project doing some cleanup in an inner city school.  One team worked on the playground, another in the cafeteria/ gym/auditorium, and I headed up those who wanted to clean up the library.

There hadn’t been a librarian in several years and the library had been rearranged to meet teacher needs, so there was no Dewey order and no card catalog. The shelves however were packed.  I gave my team guidelines and in a few hours we had an enormous pile of books to discard. One was about family life in the 1950s complete with a picture of the family watching a tiny black and white television. 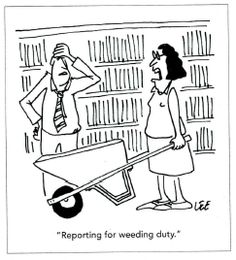 The volunteers were very pleased with how the library looked and so was the principal.  He was very impressed and told me if I had been his librarian, he would never have eliminated the position. He had no idea of who I was other than a librarian. He didn’t know about the books I had written or what I was doing in AASL.  He just saw results.  And that is why weeding is tied to leadership.

How often are you weeding?  Do you get help?  What “howlers” have you found?